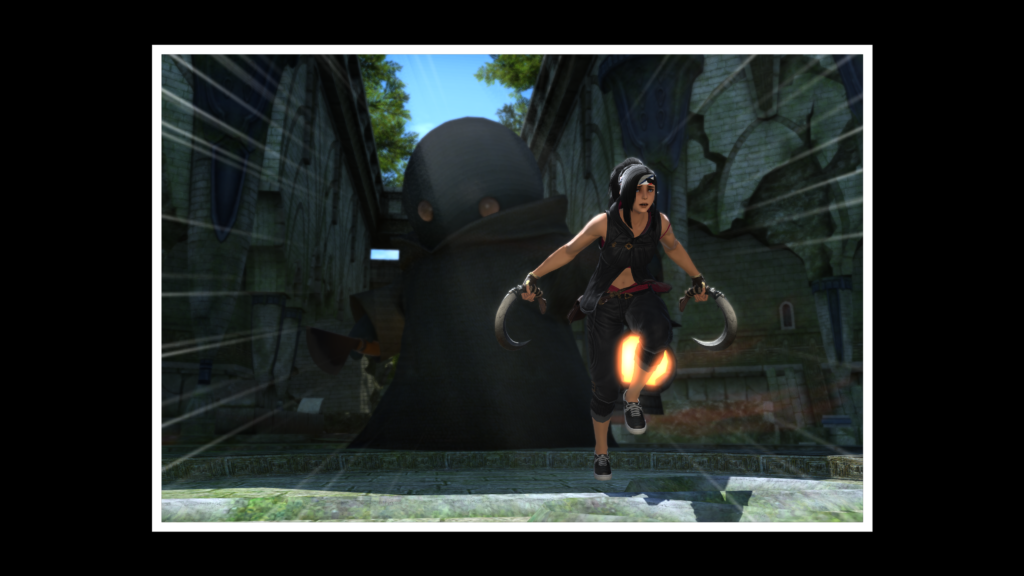 The real fight is the friends we made on the way

This time judging everything was really hard. Last time the motif of each picture was quote determined with a mount and a player in each picture. Some creativity here and there, but really in the end it boiled down to technical skill a lot. Not this time. This time it felt like a very even match-up regarding technical skill, but the motives were so different and the creativity of each of you brought in really different pictures. Comparing them was difficult as rarely a picture shared a theme with each other. So without further ado: Every entry was great and it was really a close race.
Also as I couldn’t use the brass-de-chocobo like last time I posted every fight’s theme as a link in the title of each picture.

The general guide to reading these articles:
Take your time and read through our thoughts and appreciate each entry as we did.
Please keep in mind that all rankings are relative. We tried at first to place some absolute grades on each picture but as all of them are really close in quality we didn’t get far. So the process was basically going through each picture one by one and asking “Is it better than X? If yes, is it better than Y? But worse than Z?”. I hope that clarifies some decisions.
As the entries were really close in the end we decided to only rank places 1 to 3. Everyone else will get the same prize: 1 minion of your choice and 250.000 Gil.
Every entry below the 3rd place is listed alphabetically. Let’s go!

“A Nightmare I Once Had” by Jasar Dann

Let’s start it off with a surreal entry: The horrifying dreamscape of one Jasar Dann. The picture sparked thorough joy
with many jury members!
Kingle Moogle Mog looking at the camera while saying “What are you looking at? Better continue walking, punk.”, while his minions gang up on the poor Jasar, is pure fun and a great motif for this contest. The whole scene is wonderfully presented with a great choice in the frame and a fabulous play with the background. The whole space in the picture is used and the action feels real. The colours are really great in this picture. Point for open discussion would be if the white and black mage should’ve been cut out of the picture. Didn’t impact the ranking by much, but maybe in the future less might be more.
Some critique was raised regarding the lighting, which comes off as very strong in the foreground and working with the “Save/Load Lighting Presets” feature of GPose would help a lot in the future. Especially during fight scenes.

This one really looks amazing. This is something you could see in a professional video game journal as a promotional screenshot for FFXIV. But this is not a journal.
Here we see a great choice of a boss fight! The jury loved the idea behind the picture. The usage of battle effects (the dome) in connection to the gears in the background looks wonderful. The scale between Alexander and the character really gives a great feeling to the picture. We found one thing that we would improve on this and that is the angle: Moving the camera more to the bottom right and changing the perspective to be aligned to the back of the character and Alexander looming over him. Would also help to make the laser from the boss more distinct.
Overall this picture nails the theme of the contest and was a pleasure to see!

“Hovercat vs. Shiva” by Dash Nemo

Good choice. Kong’s favourite fight in the game is Shiva! Definitely playing on the emotions of the jury here ;).
We all had a lot of fun with the idea of someone being tossed around by the boss and the animation lock on this is great! The glamour was chosen well as it fits nicely into the ice theme and the gloves suit the Shiva look. The boss itself is positioned well and the colourful aurora in the background gives a nice contrast.
But the choice of a trial also brought some disadvantages: Shiva has such a great environment and magical effects such as diamond dust that this picture also transmits the feeling of missed potential. Also the left and right side of the picture feel very empty. Some more focus on the camera positioning and some more experimentation with the boss fights and its animation could’ve easily catapulted this in the top 3.
Definitely a really strong entry and we would love to see more in the future!

“My First Fight” by Mirel Moui

That took some members down memory lane and was one of the longest discussions we had, because everyone was talking about their starting regions and what monsters they fought. In that sense this image really did what it was supposed to do.
The animation in this one is really well done and getting just the right pose with the attack enemy to look like it is being thrown away by the shield is amazing, as you cannot pause the animation on enemies. We had to metaphorically speaking “deduct some points” for the outfit though, as this was not a starter outfit which kinda breaks the “early game memories”.
Some huge creativity and eye for detail coming out of Mirel’s corner and next time with the right angle and filter we can definitely see an entry reaching the top in the future!

“Nobody Puts Baby in the Corner” – By Cho Mane

For this one we had three very different reactions:
Laila loves the dungeon and this picture reminded her of her first time in there.
Ryve gave everyone an explanation on how Final Fantasy 4 features this boss and how he loves the game.
Kong went: “Who?” only to receive more lectures from Ryve.
Overall this was a very difficult entry as you lose control over your character in the puppet form, so great work on using this and still getting a good result! The bossfight was well chosen as it is one of the most memorable and unique fights in FFXIV and making it look like Calcabrina is throwing a tantrum in the background was a great idea.
We only found two things that could be improved on: A little bit more a of zoomout to not cut off the any heads and a different angle to eliminate the huge empty third on the right side.
Otherwise a great entry and we hope to see more in the future 😉

As usual the jury contributes some screenshots as well and for this intermission we feature Laila. Laila went for the good ol’ training dummy that sees a lot more practice since we started Eden Savage content as a company static.
Good choice on the bright filter here and the red cape with the dark body gives a great contrast. Also the fire corona (ha.) behind her looks amazing.
But let’s be hoenst: The real fight for Laila was never the dummy. It was decorating the garden and the company house.
Some Behind-The-Scenes commentary: “Hey Kong, why didn’t you enter an intermission picture?” Well I worked 2-3 hours on a boss fight that was already used by a participant. As I don’t like mirror matches you will have to do with the Tonberry picture :D.