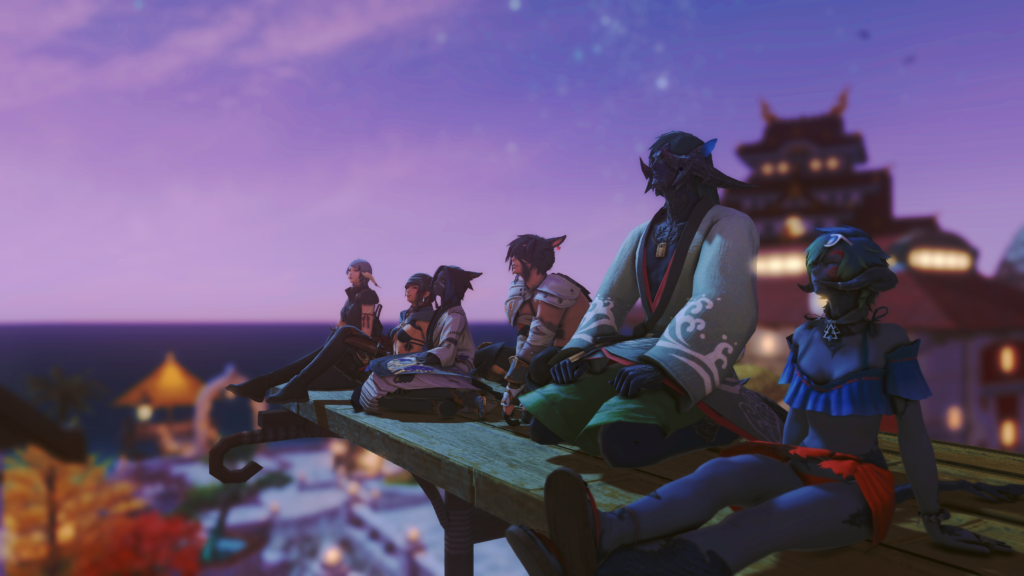 So you all know at least 3 types of companies or guilds in MMOs.
Let’s start with the most common one: The bonus-giving AFK-association. Despite the member count being in the low hundreds, nobody talks, nobody interacts with each other and nobody plays together. The only exception to that is the one dungeon per week, where 2 people from the same company are randomly matched via dungeon finder and don’t even recognize each other.

The second type is the raid group company that consists of 12-15 members. 8 of them are closely knit together and go raiding every second day of the week. The remaining 5-7 people are players who want to participate, but are only allowed to come along when someone is sick, or are players who want to brag that they are in a far progressed company, while warming the bench.

1 year and 2 months ago, February 2019, I had been playing Final Fantasy XIV for 3 whole months and was just grinding through the main story line of Heavensward. I had been playing all kinds of MMOs before, starting with World of Warcraft in 2003, moving through Guild Wars 1&2, Warhammer Online, Eve Online and many more, but I really enjoyed the Story in FFXIV. It was like playing a classic RPG with nice and simple mechanics.

I gave up on finding a good guild/company in MMOs years ago. I had that one good guild in WoW in 2005-2007, that I felt could not be recreated. It was my first company, back then, and everything afterwards had been awful experiences. DPS-elitists, egomaniac raid leads, and walled-off communities quickly turned me away from playing in companies.

But at some point I wondered if I was missing out on content in FF XIV. Maybe I needed more people for some things? What was I missing? I did not know about many activities (I have yet to do chocobo racing!) and if FF XIV had to be described in one word, then it would be “overwhelming”.

So I started looking around for a company.
My expectations were:
1) At least one person that can explain stuff to me.
2) No elitists that tell me how bad I am.
That’s it. Not more. That’s how low my expectations were and I imagine some people reading this and going: “Oh those are actually pretty high standards. I would be fine if I wasn’t insulted in Russian by my company officer.”

As I started digging through the recruitment sub-reddit for companies on Phoenix. My online experience in the early 2000s heavily relied on forums so I thought that was a good start. And there were like 2 frequent posters on that subreddit. Well, off to a good start with a limited selection. Still better than the companies recruiting over in-game chat, that sound eerily similar to pyramid-schemes.

I started talking to this Laila Arrbyte, who seemed experienced, nice, and tolerant to casual players, which lead to me joining quickly thereafter. Both boxes ticked by at least one person. Yay.
Quickly getting to know the -back then- core of the company, I understood that the foremost principle of this company was being welcoming and helping, which was awkwardly refreshing.

Now many months have passed. We had one in-game wedding, we tried extreme and savage content as a casual group, we have casual Wednesdays, we have at least 60% of a savage static group in our company, at least 3 people who know how crafting works and we have people spamming terrible terrific memes on our discord.

Many players left and more joined, but through it all I understood that companies are like flowers. You have to tend to them. You cannot only take their fruits, but you need to also offer as much nourishment as you can. And I think Laila will agree with me that we had our dry seasons, but right now, we are a company that is in full bloom.

So keep in mind to ask for help, but also free some time to help others. If you want to do any group content, ask company members to join. Be grateful and accept help from our crafters, and help crafting when newer people need it. Join us when we goof around on discord or in game. Everybody is welcome. And that is what made Sleeping Dragons another first company for me.

Merry Christmas 2020
We use cookies on our website to give you the most relevant experience by remembering your preferences and repeat visits.

This website uses cookies to improve your experience while you navigate through the website. Out of these, the cookies that are categorized as necessary are stored on your browser as they are essential for the working of basic functionalities of the website. We also use third-party cookies that help us analyze and understand how you use this website. These cookies will be stored in your browser only with your consent. You also have the option to opt-out of these cookies. But opting out of some of these cookies may affect your browsing experience.
Necessary Always Enabled

Performance cookies are used to understand and analyze the key performance indexes of the website which helps in delivering a better user experience for the visitors.

Analytical cookies are used to understand how visitors interact with the website. These cookies help provide information on metrics the number of visitors, bounce rate, traffic source, etc.

Advertisement cookies are used to provide visitors with relevant ads and marketing campaigns. These cookies track visitors across websites and collect information to provide customized ads.

Other uncategorized cookies are those that are being analyzed and have not been classified into a category as yet.

SAVE & ACCEPT
Powered by