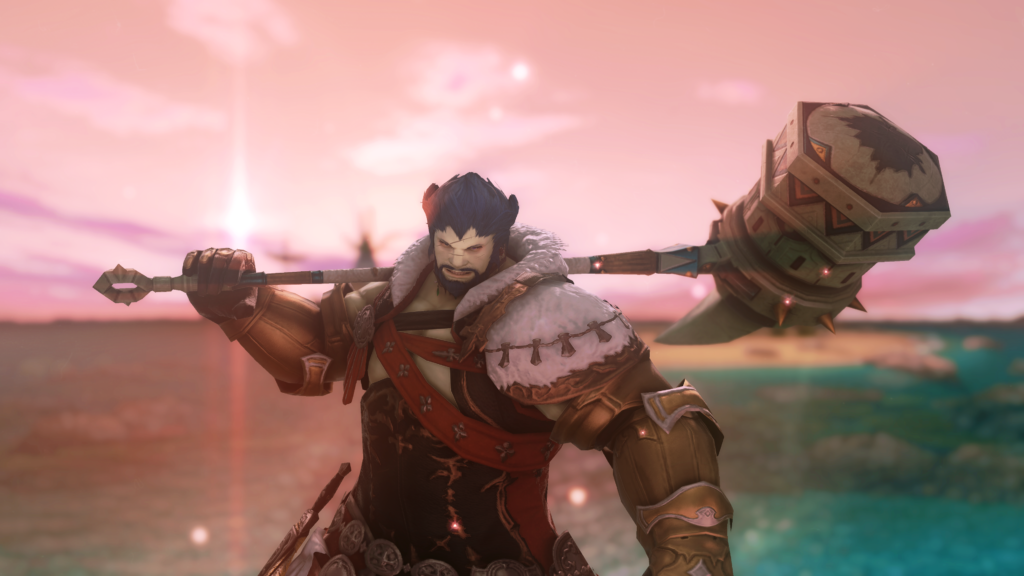 Like many other FFXI players, I was looking forward to seeing what SE did with their next MMO experience, so I joined in the original launch period. Of course, I immediately quit, as it was dreadful. A few years later, a buddy mentioned that the game had really turned a corner and was worth checking out again, and I came back to what quickly became my favourite game. I have had an on and off relationship with it ever since, taking some long breaks since recreating my character in 2013, but always coming back to it again. I properly started playing in 2017, I think, and joined the FC soon after that!

It has to be how I first met Laila! I was playing on PS4 at the time, and I hadn’t yet bought a keyboard! I was practicing typing out slowly with the controller’s terrible interface and I wrote something along the lines of “this is a pain in the ass. Talking without a keyboard is too slow in this game” and accidentally hit send in /say! Luckily the only person around to read it was Laila. By chance, she was passing and took pity on this slow-typing Roegardian, inviting me to join her FC. That afternoon I went after my first raid with a gang of the OG Sleeping Dragon members, and I’ve rarely felt as good about a win as that first victory with those who would become my friends. That evening I made the decision to go and buy a keyboard the next day, and the rest is history.

I love long games with lots of exploration, RPGs, adventure and third person action games. I got back into single player games in a big way during the COVID pandemic, playing through Control, Red Dead 2, Jedi Fallen Order, FFVIIR, and a bunch of others. I mostly play on playstation, though I have a switch that I use to play games with my wife. She kicks my ass at mariocart.

First and favourite are the same – FFVII. I played it at launch in 1997 and it blew me away. It was my first time learning that videogames could be a complex medium for storytelling, and that a beautiful and compelling plot could be as important as game mechanics, graphics or any other factor (though its pretty solid on all counts!). No matter how many times I replay it I’m moved, excited and angry at different parts of the story. And I ALWAYS buy the flower. It’s only a gil.

I’ve always loved the crafting and gathering classes, and love to explore the big maps. So many fetch quests in the game have me skipping through content, so it’s nice to do something a bit mindless and enjoy the music and scenery. When I raid, I mostly like to tank, though I don’t do a lot of that these days!

What are you missing in ffxiv?

Almost all classes other than the gather/craft ones. I always mean to level up other things, but I’ve so many quest series to finish that I never seem to find the time. And gearing up via endgame content is slow going for me with just 4 level 80 battle classes!

FFXI was my first MMO, and I was all in! I played in college, and had a lot more free time so I ran a linkshell and did a lot of endgame content. Without the partyfinder system that game was a pain in the ass, but I loved it!

I love to cook. When I get a weekend without anything to do, I’ll usually go to my local market, buy a load of nice produce and cook a fancy meal over 3 or 4 hours! My wife cannot cook at all, but loves to eat, so we’re a good match. :DI also play a lot of music. I used to perform live a lot, but these days I mostly just tinker in my office when I should be working. I have run a tabletop game group for the past few years, DMing for a regular Dungeons & Dragons game. We’ve moved to an online format during the pandemic, but I can’t wait to get back to having games around the table again.Apart from that sort of hobby stuff, I like to get outdoors a lot. I cycle, run, hike and swim in the Irish sea whenever I can!

It has to be the music in Snowcloak, right? I’ve enjoyed pretty much all the music in Shadowbringers, but snowcloak has a special place in my heart.

No pets for now, but watch this space!

Ah yes, Mojo. One of the early members. I was running around in limsa and just saw this huge man standing there. Level 35. I invited him and guided him, just as the others did. I am happy I got the chance to see him grow and us becoming friends.

« Melech Chant
Ryve Sontek »
We use cookies on our website to give you the most relevant experience by remembering your preferences and repeat visits.