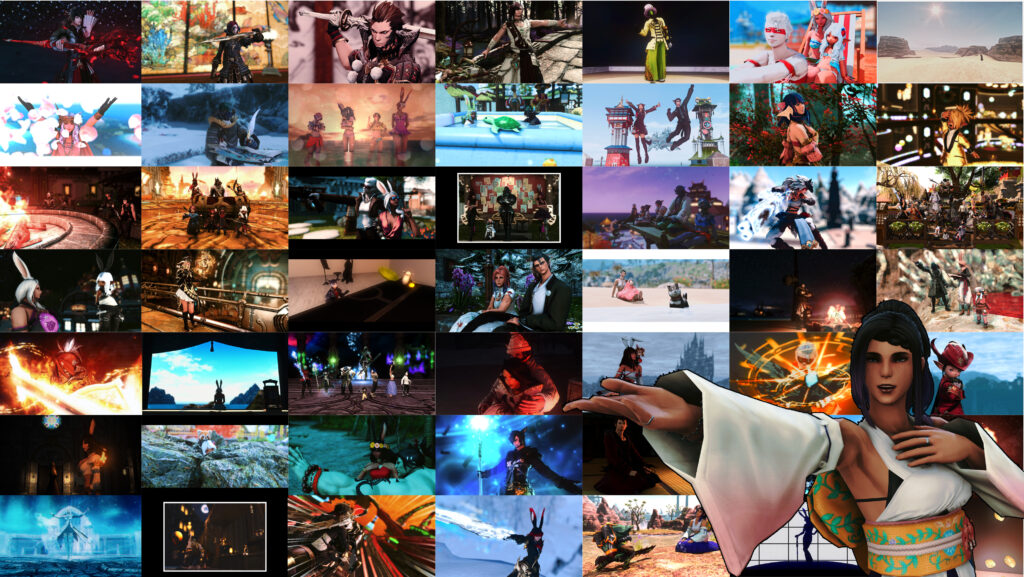 I started in November 2018, because I couldn’t stand the toxicity of WoW anymore. I tried the FFXIV Demo at Gamescom in 2012 and thought I might give it a try again.

Doing Suzaku runs with the company back in 2019 and competing with Laila in “Who can screw someone with Rescue the most?”
Also the first Casual Wednesday with Melech and Malkier, where we found out that I indeed do hate sunsets.

Right now it’s my backlog of Games:
Resident Evil 2 and 3. Darksiders 3. Horizon Zero Dawn.
Loads of League of Legends and PUBG.
Multiplayer rounds of Stellaris. Also you catch me play Starcraft 2 a lot.
Also as the organizer behind our Sleeping Dragons Fight Club I do play a lot of fighting games: DBFZ and SF5 as my two favourites.

Screenshots, POTD&HOH, Maps and of course the Storyline.

My first MMO was the Open Beta of WoW. After that I went from WoW (TBC) to Guild Wars 1, Warhammer Online, Age of Conan, Guild Wars 2, back to WoW (Legion) aaand finally FFXIV.

I host a lot of Pen and Paper Role Playing Sessions. I paint a lot of miniatures for Warhammer 40k, Infinity and Kingdom Death, all of which I also actively play. I used to play Magic The Gathering as well, before Covid…

One of the senior members of the FC, also more widely known as “Kong”. Self-declared Leader of the Fight Club.

Your first thought about him was:” Who is Kong?” and your second was probably:” If I like screenshots? Why am i being asked that?”.

While he is the nicest FC member (self-proclaimed), I do not know how the FC would fare without him. I am thankful for all the work he puts into his passion. Thank you, Kong.

He is a part of the “older than ancient” group of players alongside Shadow Cross and Laila Arrbyte, which are the social backbone of our FC that holds everything together. His most defining traits are his honesty and helpfulness, always speaking plainly in a helpful manner and giving constructive criticism when needed.  Kong also founded the so-called “Casual Wednesday” event for the whole FC, where every Wednesday at 18:OO Server time, the members gather up in a discord call and do some casual content in FFXIV, e.g. doing treasure maps or going through older raids. With his sassiness, he breathes a lot of life into the Discord calls and makes them really funny and memorable.

Kong has a great passion for many kinds of things, but among them, his greatest talent and specialty lies in in-game photography. That is why he likes to manage the members page of this website, as it brings him great enjoyment to commit hours of his life just to perform a photoshoot with each member individually and create a perfect picture that represents that person’s personality. This is also why many of our members recognize him as the Master of Photography, even though Kong likes to claim that “it is not that difficult and you just have practice!”.

Outside of the game, he loves spending his time going out to gather up with friends and play pen-and-paper and tabletop games, as well as reading a ton of literature and engrossing himself in media, like sci-fi movies and video games just being a few of his favorites. If you like Dungeons & Dragons, Star Wars or strategy games, then you will find yourself talking for hours with Kong on Discord.

All in all, Kong is a great guy that does a lot for our little community and it just would not be the same without him. To any new member, I wholly recommend approaching him if you need someone to talk to. He cares a lot about everyone equally and we are thankful for him being here and greatly respect all the work he puts into our FC.

« Laila Arrbyte
Shadow Cross »
We use cookies on our website to give you the most relevant experience by remembering your preferences and repeat visits.