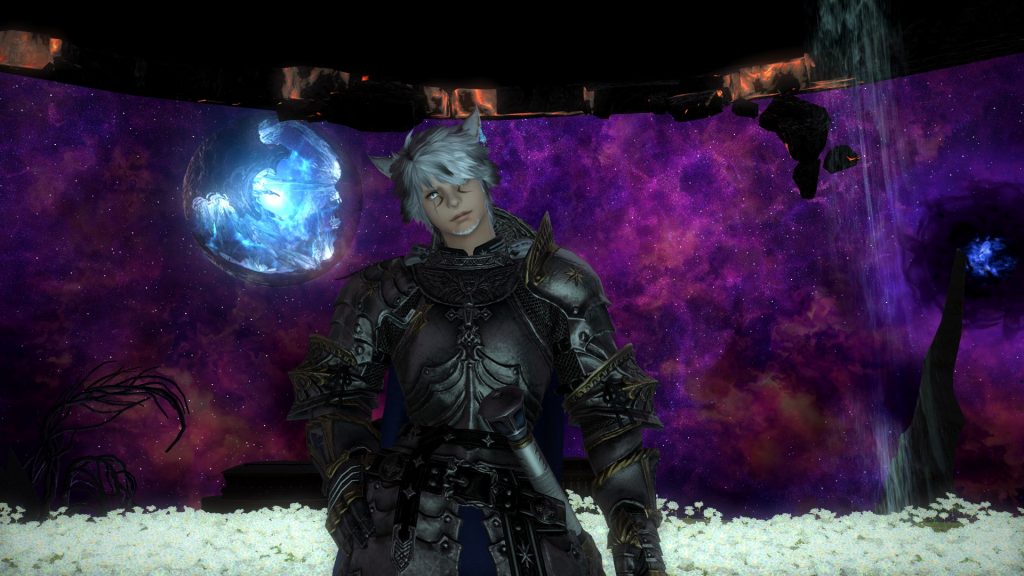 I can’t really remember exact dates/patches, but I do remember it was near the end of Stormblood at the time, I believe around November of 2018? Anyway, I joined after I had heard about the game from a friend of mine, Radca, who made it sound very interesting, so I thought, why not, considering there is a free trial.

One thing that did push me further is the music. I had heard some boss tracks, and oh boy, do I remember being excited. After that, what cemented my feelings about the game was Shadowbringers, it was, at the time, the best story I had gone through in any game, though now that honor goes to Endwalker.

God, there are so many. The most recent one would be finishing the Endsinger Extreme trial, during the learning event on the Discord. The fight itself was extremely hard, the sense of accomplishment was amazing, but what was most fun and engaging is how the people with more experience for that fight were extremely helpful and understanding when it came to us plebians who hadn’t completed it before 😀

Ahh, it would honestly be too long of a list, if I had to go over everything. In general though, I am into all sorts of stuff, games like Path of Exile, Deep Rock Galactic, TF2, Minecraft, the Metro games, etc.

In terms of genres, my favourite would be Story-Rich games. I absolutely LOVE being immersed into a game’s story, its world and its characters. Other genres include ARPGs, Shooters, Puzzle games, Exploration games, Sandbox, Horror (though I scare VERY easily, and no, this is not an invitation to spook me you tricksters), etc.

And as of recently, VR, though I am still new to that 😀

I am someone who loves a good story. As such MSQ is the main reason I play the game. That being said, I also am extremely into doing old challenging content, farming and collecting mounts, minions, orchestrion scrolls, and things of that nature.

I don’t really dabble into leveling many classes, etc, it’s just not really my thing. I mainly enjoy Tanking and Healing, as it feels amazing when you actually manage to get through a hard fight.

My very first MMO, not including some browser MMOs, because I have played a fair amount of those, though they were all quite bad, was WoW. I had tried it after some friends went into it, this was during the Legion era, and actually liked just going around and doing random stuff in the world, as WoW’s world is undeniably massive with lots of things to do. What ruined it for me though was the constant feeling that I HAD to grind gold, to avoid paying for the sub.

I consider myself to be a very musical, so to say, person. As such I quite like dancing and playing my piano. I couldn’t play for quite a while due to a large number of reasons, but I am finally getting back into it (and yes, I am absolutely learning a lot of FF14 music).

Something else that I am heavily invested in is science, and more specifically physics and math(which is why I love Kerbal Space Program). I’ve always found the two fascinating, and up until very recently I was studying Astrophysics in uni. I have however decided to leave, mainly for one reason, I came to realize how in a country like mine (Bulgaria), the last thing people care about is science of any kind, as such there are not many opportunities. I am instead getting into programming, and provided I get a job and manage to save up enough, I might go and finish off my degree.

It would quite literally be easier to list the ones I don’t. Out of any game I have played, FF14 has had the BEST sound design, by a long shot. The music is stunning, and I almost find it hard to believe how they seem to be 1-upping themselves with each expansion, maybe some sort of dark magic?

Jokes aside, all the music is great, but my favourites include, but are not limited to, the theme from Amaurot, “Footfalls”, Rak’Tika Greatwood, basically all Heavensward music, and many more…

Not currently, though I have had fish in the past. Whenever I have a chance, I want to get back into fishkeeping. I would also love having turtles or tortoises as pets, I find them fascinating.

« Cat Rider
Black Spike »
We use cookies on our website to give you the most relevant experience by remembering your preferences and repeat visits.