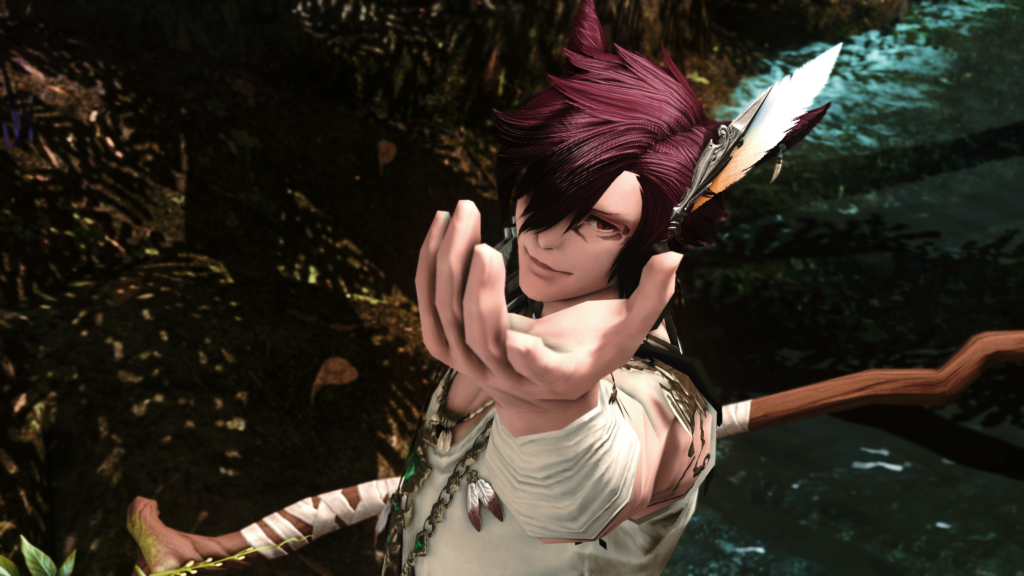 October 2017. I had a break between terms in university and was bored. My room mate and I spontaneously decided to try out ffxiv since the base game was on sale on PSN. Got sucked in and have played it since then ongoing, with only a few breaks which never lasted longer than a few weeks top.

Oh, there are so many! I had so many great moments with friends, with SDS, alone… But there are two that really stuck out to me:
First, when I just started the game and took my very first steps out of Ul’Dah and into Thanalan. The awe I felt entering a new world, exploring it, being drawn into it… Oh how I wish to relive this memory anew!
The second actually gave me this very feeling back for a fleeting moment. It was right when Shadowbringers had released and I took my first steps into Thanalan. The melancholic cutscene in Lakeland, seeing a familiar face again… It made me feel all that awe from way back then again.

According to my list of games I own… to much! But mostly I stick to JRPGs or RPGs. If I would have to name my favorite game(s series) it would be Kingdoms of Amalur, Kingdom Hearts (BBS), Legend of Zelda (Skyward Sword), Ys (IX), Tales of (Xillia)

FF XIII-2. A friend owned this game and it was the very first game I tried playing on a PS3. Had zero clue about the story of course

That would be FF XIII. I have to admit, I never managed to finish it (yet) because I am incompetent enough to always play me into corners where I can’t advance because I am underleveled… But I am just in love with the story. I love the emotional and moral struggles the characters have to go through and to this day Hope has one of the best character arcs in any video game for me.

Mostly collecting stuff. Triple Triad cards, minions, orchestrion rolls… I love the feeling of working towards a goal and putting in checkmarks on my lists whenever I got another triple triad cardThe very casual stuff, the MSQ, sidequests, doing dungeons with Trust system, everything that is not stressful

Easier housing for everyone. I wish I could afford a house but they are too expensive, plots seem to be rare and even if I get a house I couldn’t afford the furniture for it =_=

It is my first mmo. Never saw much appeal in mmos before it. Still don’t see any appeal in other mmos.

Being a fullblown weeb. I read manga and watch anime a lot. I cosplay, go to conventions and I collect anime figures. If I am not weebing, I enjoy writing, drawing and sometimes playing around in photoshop.

My room mate has two cats that seem to like me more (ha!). Same-aged siblings although the boy (Uri) is way bigger than his sister (Alouis).
When we first got them, we got told it were two boys. By the time we noticed it was in fact not two boys, Alouis already listened to her name so we stuck with it. Both are named after anime characters. Bonus points if people can guess the two anime they are from 😀

“When I first talked to Jace, she seemed shy, maybe even a bit timid, but as I got to know her better, I found that she is not only kind, she’s also very easy-going. She’s even quite competitive at times, and always close to laughter, with a pretty wicked sense of humour.
All in all, it’s been great to see her evolve and grow into the FC as well as she has, and despite only knowing her for a few months as of yet, I consider her a very good personal friend of mine.”

Who is Eirian Meyrick?

Eirian Meyrick was an alt character I made out of boredom. It was with this character that I first found SDS.
While Eirian is long since inactive and has “left” the FC, he still was my first face here, so I thought it might be nice to have a little memorial for him 😀

« Jasar Dann
Tiad Dici »
We use cookies on our website to give you the most relevant experience by remembering your preferences and repeat visits.