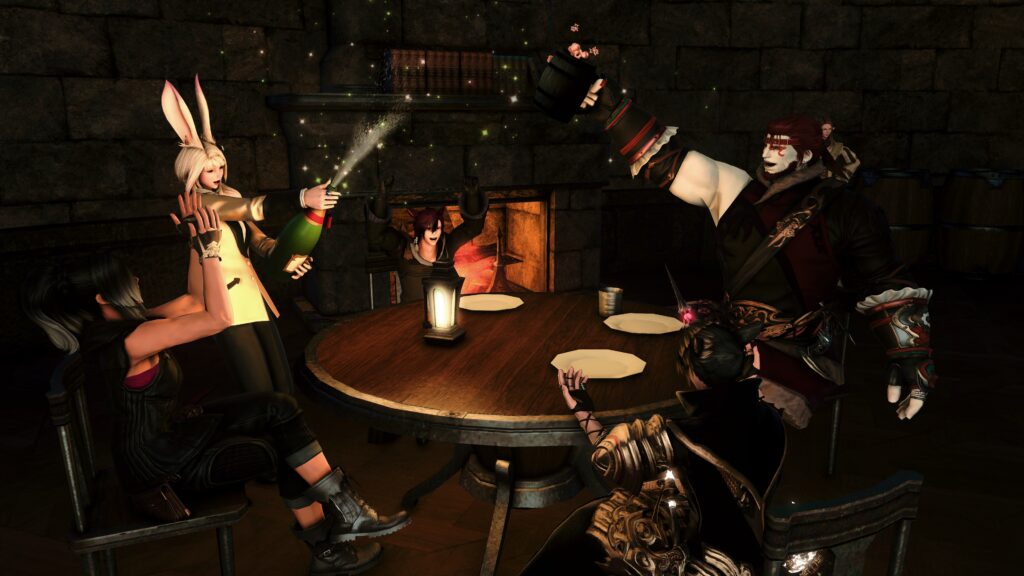 And since most of us are stuck in a lockdown and can’t waste our time spending it with family and potential real life friends like “normal” people, I hereby announce our very own FC New Year’s Eve party with Blackjack and Hookers! Well, maybe not the hookers; we’ve only got some ‘decently’ clothed bunny girls. And the Blackjack, well… we have Triple Triad, which is like babies’ first blackjack, I guess… BUT it is a party, and it will be long and fun!

As you can see, it will start early, and it will end early… in the next morning! So, buckle up, get some booze (or soft drinks for the minors), snacks and be ready to bullshit through the night. We have a schedule filled with lots of games and there is still room to get in some more games. And for those who don’t want to play games, just come along and have a nice time watching how others fail in fighting each other, how they lie as they murder FC members in cold blood or their sick 360 no scopes in CS:GO (Is that a thing? It really should be). Or just go away, eat some dinner with your pet and return whenever you think stuff is getting interesting again. No one but me is required to sit through the potential 10 hours of me hosting, getting drunk and talking nonsense.

But enough talking about the event. I am sure, everyone wants to know what will happen at what times, so here is the schedule:

→ A short break due to midnight for a lot of us

23:30 ST onwards: whatever the majority wants to do/play

Throughout the whole evening there will be another ongoing game that will rely on talking and listening to people and can be joined at any point during the evening. More info on that will be revealed later.

Other notes of importance:

-> CS:Go and Team Fortress 2 are both free to play games and should be downloaded ahead of time, if you’re interested in joining.

-> Fight club members have a variety of games that can be played PVP, so it’s best to ask people with the “Fighter” role on discord what games are available.

-> Among Us can be played in different variations and modes. Some of them are pc-only so please give notice beforehand if you play on another platform.

-> There will be a live ticker during the event, to get the actual times what games are currently played and where. Different games can be played simultaneously if enough people are interested into splitting into smaller groups

-> “Dinner for One” is a short film, in English synchronization, that is a German tradition and has to be watched at least once on New Year’s Eve. I will stream it and everyone can enjoy a bit of fun to toast into the New Year.

So, having said that, vote with the SDS icon if you join at any point of the night. +1 if you want to get anyone of your friends on as well. Any more questions can be sent to me directly via PM or any channel on this server. And with that, I hope to see you all on New Year’s Eve o/

by Jace Nolan
Casual Wednesday (Treasure Maps)
The Maps and The Furious: Eorzea Drift
We use cookies on our website to give you the most relevant experience by remembering your preferences and repeat visits.